You are here: Home » News » OZOLEA side-by-side with farmers to support the quality of their milk 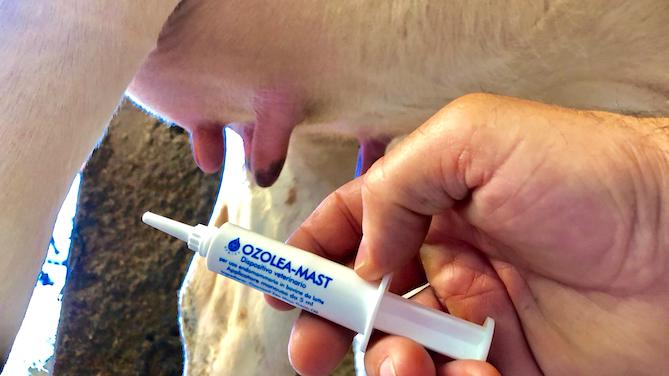 Recognizing and supporting farmers’ effort to ensure safe and quality milk every day is the concrete commitment of OZOLEA, which simplifies farmers’ work and defends their role in the supply chain. Together, OZOLEA and the farmers can communicate the value of all this to the other dairy operators and also to final consumers.

In a dairy farm, biosecurity is a daily occurring concept. There are several measures that a dairy farmer should put in place to ensure biosecurity, measures that are national and international, interlinked and all requiring a balanced and dynamic attention, which the farmer has learned to deal with. European animal health legislation [Reg. (EU) no. 2016/429) defines biosecurity as “the sum of management and physical measures designed to reduce the risk of the introduction, development and spread of diseases to, from and within: (a) an animal population, or (b) an establishment, zone, compartment, means of transport or any other facilities, premises or location“. This “package of measures” and its correct daily application are at the base of food safety. Thus, in any food production, from farm to fork, we need the commitment and professionalism of all operators, encouraged to risk management not only because this is what the law says, but for a matter of social responsibility aiming at safeguarding animal, plant, human health and protecting the environment. Farmers play an essential role in dairy production since they contribute to a safe milk for the final consumer thanks to their everyday activity in dairy farms, according to good hygiene practices and an effective management plan.

Evidently, the biosecurity approach does not stop at the farm gates, and all others operators cooperate and work to provide safe products to the consumer. Dairy farmers will do their best in farms under their control, while guaranteeing collaboration to the operators that come in the following phases of the production. Their commitment covers several aspects, all closely related to each other. As a fundamental biosecurity goal, the farmer acts in order to reduce the risk of introduction, development and spread of diseases in the herd and from their farms to other neighboring farms or interacting activities, as established by the aforementioned definition of biosecurity. As we all know, everything a farmer does to impede, reduce or prevent zoonoses from reaching humans is a set of actions aiming at ensuring the food safety of milk, as well as an animal health goal. There are many aspects to which dairy farmers have to pay attention: let’s see some of them.

Animal movement, just introduced or already present in the dairy farm, is the aspect that represents the most important risk for the health status of the herd and therefore requires simple but essential rules to follow. Farmers have to maintain rooms housing animals, storage rooms and the milking parlour clean. Attention should also be paid to the staff, that should work in only one farm to not be a carrier of potential diseases. Preventing infestations (insects and other animals, such as rodents, birds, etc.), as well as pest control are highly important. Other domestic (dogs, cats) and wild (e.g., wild boars) animal species can represent sources of infection and appropriate actions should be carried out also in this case. Precautions and management measures should be defined and implemented both in the case of entrance of new and regular visitors. Furthermore, farmers should be able to recognize certain signs related to the most common infectious diseases for dairy cattle [infectious bovine rhinotracheitis, bovine viral diarrhea, paratuberculosis] and implement correct operative preventive and control plans (vaccinations, elimination of infected animals, eradication, etc.). We should not forget the need to know common signs of endo- and ectoparasitic infections, as well as the ability to prevent and control these infections, in particular in younger and grazing animals by means of control and eradication plans. For all these aspects, dairy farmers need to be supported by professionals such as veterinarians and other experts on the subject.

Cows’ udder infections represent a high risk for biosecurity in dairy farms, being the main health problem in this type of farms. Particularly in dairy cows, the tool used to monitor the prevalence of infections is the so-called somatic cell count (SCC): although this data does not specify exactly which microorganism is responsible for the infection, its correct interpretation makes possible for us to understand whether there is a suspicion of prevalent infection in the farm. Regardless, the information relating to a high value of somatic cells is that we have an inflammatory reaction affecting the mammary tissue, or mastitis.

In the future, livestock production will be involved in the great and difficult challenge of fighting antimicrobial resistance (and therefore antibiotic resistance). Infectious diseases that proliferate in a farm oblige the dairy farmer to use antibiotics and, given the current trend of the antibiotic resistance phenomenon, biosecurity measures are crucial.

However, sometimes preventive measures are not sufficient since it may happen that biological, physical (for example, excessively stressful milking procedures for cows’ udders) or chemical agents lead to mastitis, making the mammary tissue ideal for bacterial infections, although we have done a lot in our dairy farm to prevent them from spreading. Before resorting to antibiotic therapies, there is a possible complementary veterinary solution that helps the natural self-regeneration of the tissue, and is made by OZOLEA: the veterinary device OZOLEA-MAST for intra-mammary use. In the previous moments a mastitis is considered clinical, a secretory and functional disorder occurs frequently, and it is commonly identified by the milker for the presence of clots in milk, or for a variation in the electrical conductivity of milk.

The adequate support to the functionality of the tissue and the physical-mechanical filming effect of OZOLEA-MAST, while protecting the mucosa, allow the tissue to proceed with natural regeneration, increasing the possibilities of the tissue itself to manage autonomously a possible bacterial aggression. The bioengineered oil barrier created by OZOLEA-MAST is a very uncomfortable environment for bacteria: repeating the application until full tissue competence is achieved makes bacterial colonization difficult, slowing the aggressiveness of its attack. The use of OZOLEA-MAST does not have the unique goal of facilitating this regeneration process, but aims at much more: using OZOLEA-MAST means being able to maintain the animal in a state of welfare and productivity, before the disease occurs, which would mean loss of productivity, necessary intervention with pharmaceutical products, related side effects, elimination of milk during the withdrawal period, contribution to the trend of antibiotic resistance and repercussions on the supply chain, stress for the animal and further lower productivity.

Food safety, an ever changing concept. OZOLEA’s contribution to the dairy sector with the SafeMilk protocol
OZOLEA choses sustainability, in alignment with 13 out of the 17 United Nations’ SDGs for the future of dairy