Preventing and/or controlling subclinical mastitis is good for everyone, including the atmosphere

You are here: Home » News » Preventing and/or controlling subclinical mastitis is good for everyone, including the atmosphere

In some of the articles published recently in OZOLEA’s website, we discussed the importance of controlling mastitis aiming at improving animal health, dairy production and, therefore, profit. In other words, we should focus on efficiency, which means an optimized use of inputs per specific quantity of output – milk.

Here the articles OZOLEA published: “What changes in milk tell us when we forestrip” and “Making money by saving milk”.

Striving to achieve all these goals also have positive and beneficial effects on the environment.

Thus, let’s discuss again about sustainability without mentioning this word throughout the post. We will make a simple overview of a scientific study1 conducted in Norway (Özkan Gülzari et al., 2018).

Being mastitis one of the hardest issues to treat in dairy cows, it has been recognized as an impediment to perform an efficient and feasible livestock production.

Mastitis means milk losses due to reduction in milk yield, discharge of milk due to withdrawal periods and more dairy cows lost and replaced. Moreover, if the disease is in the form of subclinical mastitis it is hard to detect visually at udder and milk level.

Subclinical cases can be detected by checking the SCC (> 200,000 cells/mL) and deciding for milk culturing. 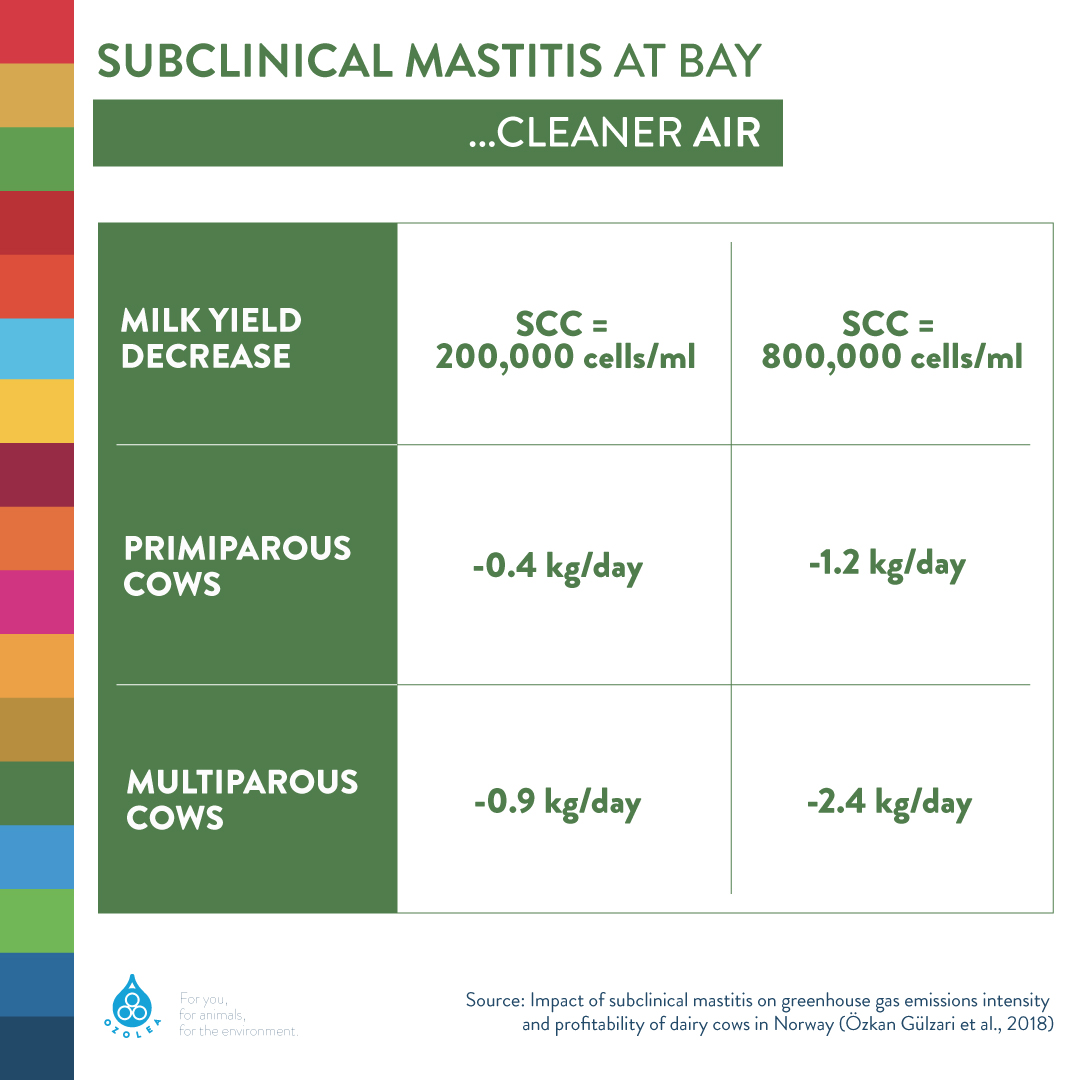 Milk yield decreased as the level of SCC increased in all the scenarios, reflecting the impact of disease on production, as reported in table on the left.

Reduction in total feed intake occurred as SCC increased. It resulted lower in primiparous cows (1.4-2.8%) than in multiparous cows (3.3.-6.6%).

The highest net margin (ENPV) was observed at 200,000 cells/ml. This parameter was mainly driven by milk yield and milk and feed market prices.

Impaired animal health also means increase in greenhouse gas (GHG) emissions produced per unit of milk. The findings for emission intensities were 1.01 kg and 0.95 kg CO2/kg for fat and protein corrected milk in primiparous and multiparous cows with the lowest SCC (50,000 cells/ml), respectively.

Keeping subclinical mastitis at bay, as it can be for other diseases, can be perceived as a strategy useful both to improved inputs exploitation and a strategy to reduce the GHG emissions intensity from dairy farming.

This was the perspective from Norwegian dairy farms. Performances for any parameter here described would probably give different values depending on the European area assessed.

However, these findings can give use a brighter idea about udder issues: doing our best in preventing and controlling diseases at dairy farm level will pay off.

And this is completely sustainable.